This holiday season, as the BBJ compiled its annual list of the year’s top 10 stories, it seemed to us that while a lot happened, much was left to wish for.

Bellingham’s wish list for 2008 could include a waterfront master plan, an upswing in the housing market, a resolution to the city’s growth question and a better permitting process. At least Bellinghamsters got what it seems they’ve most wanted for the past five years — a Trader Joe’s.

For now, we’ve made a list and checked it twice, and we’ll leave it up to our readers to decide who’s been naughty or nice. Western Washington University announced this year that it would be moving part of its campus and offices down to several of these older buildings on the Georgia-Pacific site. This was one of several announcements about the site in 2007.

For the second year in a row, the former G-P site lands on our top 10 list.

But this year, along with a new name, the Waterfront District is beginning to have the formations of a face, as well.

Despite the ongoing contention over the draft EIS report, which sets the Port of Bellingham’s total cleanup cost for the site at $44 million, the 220 acres of waterfront redevelopment property are finally beginning to take shape.

In June, we reported on the port and city’s solidifying efforts to reroute the Burlington Northern Santa Fe train tracks around the site, as well as a push by residents and staff to get a “quiet zone” implemented to quell the train’s increasingly louder whistle.

In August, WWU moved into waterfront offices, and the port began a concerted effort to woo NOAA to relocate from its Seattle headquarters to the waterfront’s deep water shipping terminal. In November, U.S. Rep. Rick Larsen endorsed that effort.

In September, G-P announced that its tissue mill would close at the end of the year, and the port has already begun preliminary efforts to redesign the space into a marine trade center and innovation zone.

In October, the Waterfront District got a new name, a swirly new logo and a more defined marketing campaign.

It’s a shape with a name, and now it just needs a completed master plan.

For the past several years, the hot housing market routinely made its enthusiastic appearance on our top 10 story lists.

This year, “stabilizing” is the term most real estate agents have used to characterize the housing market. Others might say “slowed down,” or “corrected.”

While prices have remained steady or increased for the most part in Whatcom County, sales have slowed and the market has inched toward buyers’ favor.

And while the national sub-prime mortgage crises hasn’t been felt as acutely in Bellingham as in other areas of the country, foreclosures have increased and are predicted to continue increasing, and the general consensus from local real estate experts is that lending standards have tightened and the rental market is blossoming.

Before this year, you could likely count the number of Whatcom County residents familiar with the urban growth term “safety factor” on two hands.

But that changed this year when the county decided in August to recommend bringing 250 acres of land into Bellingham’s urban growth area — a major departure from the city’s recommended addition of approximately 2,200 acres — based on a different “safety factor.”

The county’s recommendation included land around King and Queen mountains, north of the E. Bakerview/James Street UGA area, but did not include the controversial 580-acre Larrabee Springs development, proposed by landowner Caitac USA in the Cordata North five-year-review area, which was included in the city’s recommendation.

The year saw passionate lobbying from pro-expansion landowners, such as the Larrabee Springs folks, and firm admonitions from anti-growth advocates.

The city and county were expected to enter into a reconciliation process this fall to resolve those differences, but the city has opted out of the discussion, leaving the ultimate decision to the county.

It looks like, much to the dismay of developers, residents and city staff, this issue may drag on for a while, and might possibly land on next year’s top 10 list as well. 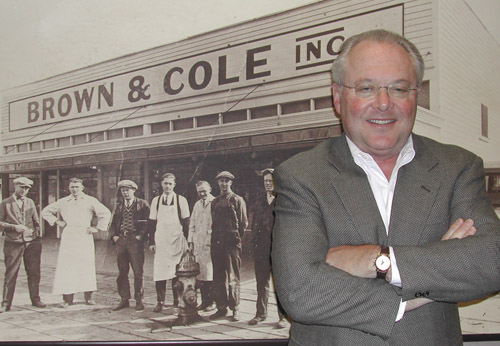 Craig Cole, CEO of Brown & Cole, expects his company to be out of Chapter 11 bankruptcy by the end of the year, with the help of Los Angeles-based investment firm Hancock Park Associates.

After less than a year of trying to recover from its Chapter 11 bankruptcy filing in November 2006, local grocery company Brown & Cole started coming up for air in 2007.

In August, the company’s president and CEO, Craig Cole, said that a California investor (announced in October as Hancock Park Associates) was in negotiations to purchase the company for $40 million. The plan, which was presented to the Seattle Bankruptcy Court this summer, would rescue the company from bankruptcy and result in store upgrades.

The downside of the deal means potentially curbing health care for the company’s employees.

Cole expects to get approval of the deal by the Bankruptcy Court before the end of the year.

For two of the airport’s newest tenants — Western Air and Skybus — 2007 was a crash landing.

The unfortunate tale of Western Air culminated with a brief month of charter service flights to Los Angeles, San Diego and Phoenix in January that quickly ended after reports surfaced of financial struggles, clandestine fuel stopovers in Seattle and an inability to run credit cards.

Skybus initially appeared to be faring well until the high price of jet fuel forced the company to announce in October that flights from Bellingham to Columbus, Ohio, would come to a screeching halt in January 2008, despite fairly full flights.

Bellingham’s future skyline climbed down a few notches this year as every proposed condo tower project remained on hold, largely due to financing problems.

In April, we reported that developers of the proposed seven-story, mixed-use building on East Chestnut Street and Cornwall Avenue, known as Chestnut Park Condominiums, had put the project on hold because of an increase in the cost of building materials and difficulty finding financing.

In fact, none of the high-rise condo towers proposed in the last few years in Bellingham have broken ground. These include Bay View Tower, a 23-story condo project at 1217 N. State St., Rick Westerop’s 18-story Morse Tower on the Morse Condominium site, and the 15-story Cornwall Place on the corner of Cornwall Avenue and East Maple Street proposed by Cabochon Construction.

Some developers still have hope that their projects will get financing and break ground, but skeptics say that with the way the market is looking now, developers need to get their heads out of the sky.

David Ebenal’s four-building development project on the Bellwether Peninsula moved forward this year with the announcement in November that CH2M Hill would be an anchor tenant.

The engineering company, formerly known as VECO USA Inc., signed a letter of understanding with Ebenal to take up 45,000 to 50,000 square feet of space in the project. The new offices would accommodate up to 250 new CH2M Hill employees — mostly engineers, drafters and technicians.

The move hinges on the city’s approval of a 50-foot building height for the structure intended to house CH2M Hill. Once approved, the port would officially enter into a long-term lease with Ebenal, and CH2M Hill would sign a contract to locate there.

The effort hit a glitch in November when Eldridge-area residents complained of view blockage and unfair height limits.

Before the highly anticipated mayoral election in November between the two Dans — Dan Pike and Dan McShane — business owners and developers held their breath before pursuing any new projects.

They wanted to see what the future business climate would bring before making any big deals. With the definitive victory of Dan Pike, who rustled up support from seemingly every corner of the community, many in the business community are toasting.

There might as well have been a ticker tape parade when Trader Joe’s opened to great fanfare and hoopla in the newly remodeled Sunnyland Square on Sept. 28.

Tales of circling the store’s parking lot and boasts of three-buck Chuck purchases dominated conversations for weeks afterward, and even the mayor was on hand for a ribbon-cutting ceremony.

Without the permitting process, BBJ reporters would have a lot less to write about.

This year, in our October issue, we reported on the city’s attempt to revamp the permit review process by testing a pilot program that focused on coordinated permit review overseen by a project manager.

The Building Industry Association of Whatcom County agreed to be the city’s commercial guinea pig, and it remains to be seen if the process is more or less efficient than the standard process of review.

Not surprisingly, BIA officials and developers remain skeptical of the new review system, and think the only way to achieve efficiency and predictability is to deregulate the codes. But planners are hopeful this new process will turn around the notoriously lengthy permit turnarounds.